What Is Drug and Alcohol Testing and Why Do We Carry Out This Service?

Part of a lab technicians job is to conduct drug and alcohol testing upon request from an employer. This can be requested for a number of reasons. For example, an employee who has been involved in an accident – perhaps driving a forklift truck; and the employer believes he/she is under the influence of drink or drugs. Other times it could be an employer wanting a random drug and alcohol test on all their employees. This isn’t as malicious as it may sound. For instance, we recently had a group of plumbers and electricians from a local firm that had been offered positions at a nuclear plant and the employer required formal evidence that they were clear of drink and drugs before they could commence work at the site.

Tests for drugs and alcohol can be carried out using two types of urine pot – one will give immediate results; the other is sent to the lab for a more detailed report and the results are usually returned within 48 hours.

These tests must be performed following a strict procedure, as should a person lose their job and they take their employers to court, it would need to be proven that the procedure in ascertaining their positive results was followed to the letter.

How are tests carried out?

Firstly, the bathroom must be prepared. The Technician will remove any items that can be removed from the bathroom – bins, soaps, bleach etc. The Technician will thoroughly search the area including looking behind radiators, lifting the cistern and behind pipes to make sure someone hasn’t hidden anything that could pollute the sample. If there is a window in the bathroom, this will be taped up securely to avoid any samples being passed in and out by family members or friends. The toilet cistern will be taped up and the flush handle or button will be taped so it cannot be flushed. The taps will also be taped up so they cannot be used to dilute the sample. The last thing to be done is to pour some coloured liquid down the toilet so should someone tamper and flush the toilet, it is immediately evident.

Once all of this has been done, testing can begin. When the person enters the room, we ask them to remove any outer clothing and hats and ask they empty their pockets, as it is a key part of the procedure. The individual undergoing the test must then fill in a form with name, address, DOB and provide photo ID. If they do not have this, they must be formally identified by their Manager.

Questions will also be asked if they have taken any prescription or over the counter medication in the last 24 hours, if they have had any alcoholic drinks or if they have eaten any poppy seeded rolls/bread/muffins as these can all skew the accuracy of the tests.

The person will sign the declaration that he/she is happy for the test to be conducted. If they refuse to sign, the test will be abandoned and it will be declared as an instant fail and be reported to HR to follow up on their policy.

If they sign, the Technician would walk them to the bathroom to fill the pot (if it is an instant drug test) or fill the two tubes if it is a lab test. They will not be able to wash their hands as the taps are taped up, so once the pots have been handed over they can either wash their hands in another bathroom or use hand gel. It is important that the pot(s) remain in sight of the employee at all times. 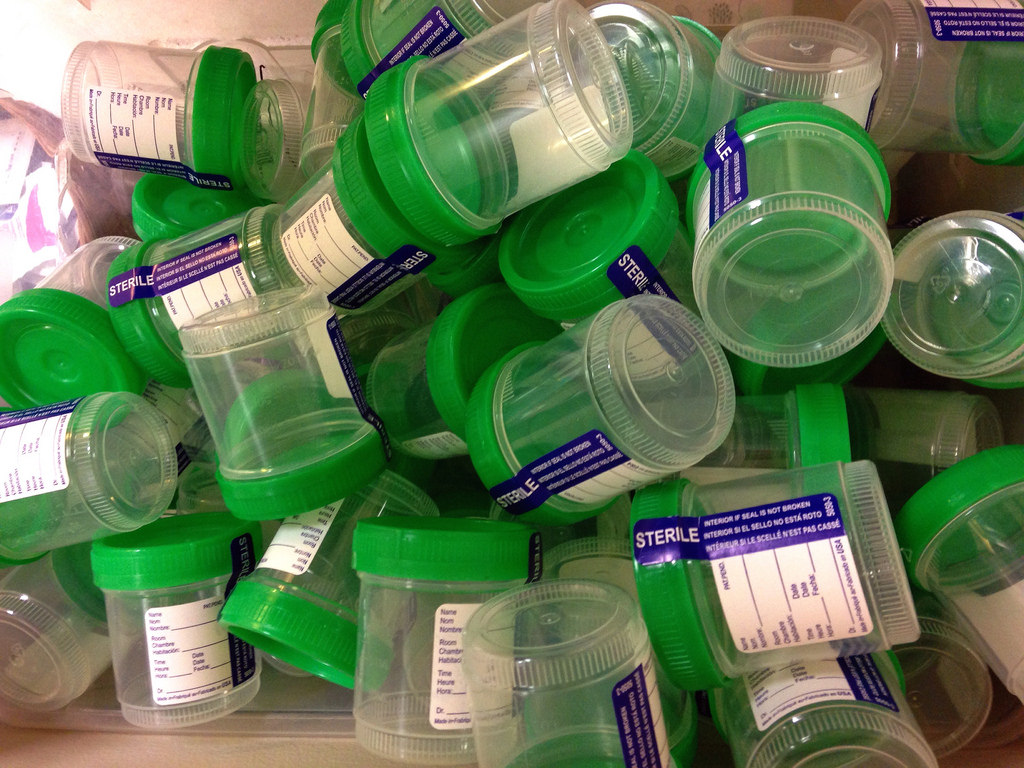 If the test is to provide an instant result, the strip on the pot will be removed and the results of whether it is a negative or a non-negative will be shown with lines similar to a pregnancy test. If the result is showing a non-negative result, the urine is decanted into the laboratory tubes and sent for further testing.

The pots are sealed with an anti-tamper seal and placed in a padded envelope ready for posting to the lab. The test is then complete.  The two lab pots will be sent off and tested for drugs and alcohol.

What if you only need an alcohol test?

If just an alcohol test is required, the Technician will use a breathalyser, similar to what the Police will use for roadside tests. The person will be asked to blow continuously into the device until it bleeps, telling the technician it has collected a sufficient breath sample. It will then show immediately if that person is over the legal limit, which in the UK is 35 micrograms for every 100 millilitres of breath. If the person refuses to take the test, it is again, an immediate fail.

Drugs & Alcohol Testing In The Workplace

Working in Winter - Safety Tips What Can Employers Do To Support Their Staff Over Christmas? How To Prevent Risks At A Christmas Party Seasonal Affective Disorder in the Workplace It's Flu Jab Season: Why You Should Provide Corporate Flu Jabs How to Avoid Common Illness in the Workplace

Tell us your name and number below and we'll give you a callback to discuss your requirements.